While large changes in nature causes tremendous disasters to human society, the effects of human activities, such as global warming and destruction of ecosystems, bring about a change in the natural system and become a constraint on human activities.

Data Integration and Analysis System (DIAS) started in 2006. The goals of DIAS are a contribution to realize Japan’s comprehensive security and safety of national citizens according to collect and store earth and each area’s observation data for a long time;
to analyze such data in combination with socio-economic data, and convert data into information useful for crisis management with respect to global-scale environmental disasters, and other threats; and to make this information available within Japan and overseas.

Internationally, DIAS has connected to many data centers from all over the world of Global Earth Observation System of Systems (GEOSS) participating countries. Furthermore, DIAS is also evaluated as the precedent case in terms of working most comprehensively on reviewing e-Infrastructure for interdisciplinary and super interdisciplinary collaboration within Belmont Forum, a forum among science and technology funding agencies.
In addition, DIAS collaborated with many projects including the Social Implementation Program on Climate Change Adaptation Technology (SI-CAT), a project which works with various types of task parties/decision makers. This allows us to continue to develop and progress in building long-term and stable systems as a social platform to contribute to global social issues such as climate change adaptation and mitigation. 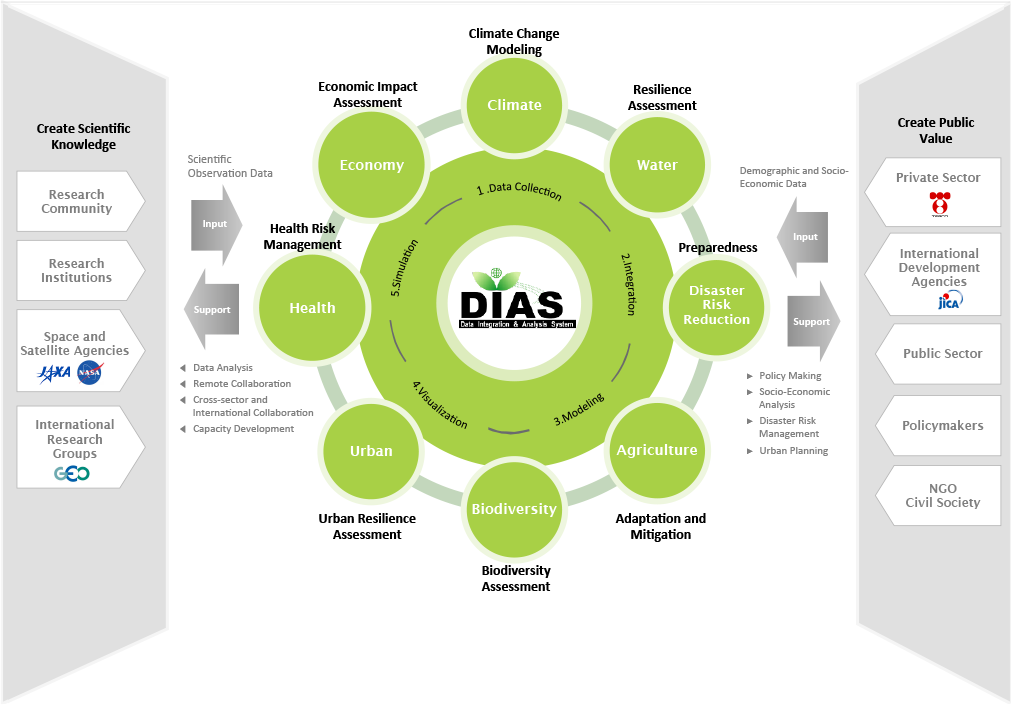 Various information is necessary to solve environmental issues, including global-scale observation data; reanalysis data; local observation data for down-scaling and the construction of advanced models; urban building, vegetation distribution, soil and other surface cover information; and sewage network information. The CMIP3 and CMIP5 are also essential for long-term forecasts. In addition, it is necessary for stakeholders to provide the data involved in problem resolution, such as statistics on the outbreak of disasters and health hazards, and crop yields, fishing hauls, and other production statistics.
DIAS archives such kinds of data according to the priority of the associated project. In areas such as Asia and Africa where support is needed for data archiving, DIAS provides an integrated support portal for metadata creation, quality management, and data input. Meanwhile, data easily available to specialists is not necessarily archived in DIAS.
Moving forward, the data created in each associated project for the purpose of building advanced models is scheduled to be sequentially archived in DIAS, and open data from various ministries is expected to increase through coordination with government agencies.

Promotion of Earth Observations in Japan

In the last five years of the GEOSS 10-year Implementation Plan (2005-2015), it has been necessary to accelerate the integration of the global observation systems in Japan. To this end, it was decided to centrally register and publish metadata files including public URLs for data and observation items on the Ministry of Education, Culture, Sports, Science and Technology (MEXT) Earth observation portal site with the aim of releasing and sharing observation data for the Action Plan for Japanese Earth Observations.
When an institution implementing an Earth observation project creates a metadata file, the properties of the data which each projects accumulate and store are scrutinized and in principle, the DIAS metadata creation support tool is used to create the metadata in order to promote the unification of metadata formats and the integrated application of data. Already metadata registration has done as a target of more than 100 projects and currently registration of more than half of them is completed. When metadata of data sets within the projects are already opened, the metadata is downloaded and processed sequentially to make it retrievable by the Search and Discovery System for DIAS Datasets.